Call Us Now!
7962665090
Email Us At
cghmin7@gmail.com
Donate Now!
As a Ministry, Bible For Israel believes that Yeshua (Jesus) is the Messiah.
We have such assurance because of prophecies like Micah 5:2 (5:1 in the Hebrew Bible), which seems to clearly identify Bethlehem as the birthplace of the Messiah.
For 2,000 years, Christians have pointed to and relied on this prophecy as one piece of evidence to prove Yeshua’s true spiritual identity.
But is this what the Prophet Micah really predicts?
Micah prophesied:
“But thou, Beth-lehem Ephrathah, which art little to be among the thousands of Judah, out of thee shall one come forth unto Me that is to be ruler in Israel; whose goings forth are from of old, from ancient days.”  (Micah 5:2 in Christian Bibles; or 5:1 in the Hebrew Bible)
In this article, we’ll look at what the Rabbis of today and Jewish sages of the past say about Bethlehem and the Messiah in this passage. Then we’ll look at how Christians through the centuries have responded.
But first, let’s look at the prophet Micah. 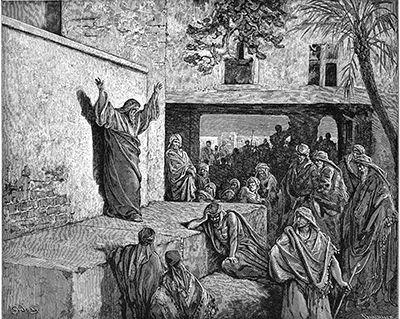 Micah:  Who Is Like YHVH?
The name Micah (מִיכָה) is an abbreviated form of Micayahu (מִכָיָהוּ).  By the end of his book, Micah invokes his name to boast of God’s faithfulness to restore an unfaithful people.
He asks them:  Who (me) is like (k) Yah (yah)?
Micah’s book begins with his origins: the Judean agricultural town of Moresheth about 25 miles southwest of Jerusalem (Micah 1:1).
He prophesied from about 737–696 B.C. to both the northern and southern kingdoms of the divided nation of Israel and Judah.  But, primarily, he prophesied from his rural base in Judea, among the poor and disadvantaged.
At the same time, the prophet Isaiah was welcomed in the court of the capital, Jerusalem.  Micah’s message, in fact, is consistent with Isaiah’s.  For that reason, some scholars have even speculated that he was a student of Isaiah.
Micah warned, for example,
“Woe to them that devise iniquity And work evil upon their beds!  When the morning is light, they execute it, Because it is in the power of their hand.” (2:1)
Isaiah likewise declared, “For the terrible one is brought to nought,  And the scorner ceaseth, And all they that watch for iniquity are cut off.”  (Isaiah 29:20; see also Isaiah 32:6–7 and 33:15) 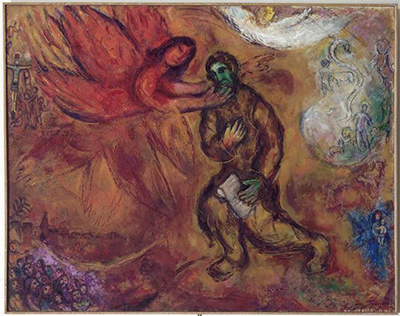 The Prophet Isaiah (1968), by Marc Chagall  (Photo: Fair Use)
Jewish Sages: First Century
Before the birth of Yeshua, some Jewish priests and at least one authoritative Scripture translation believed that Micah 5:2 meant the Messiah would come from Bethlehem in Judea, which in more ancient days was called Ephrathah. (We find this Judean town mentioned in Genesis 35:16, 35:19, and 48:7.)
These translations of Scripture into the common language of the people, Aramaic, were called Targums.  One such translation of the Tanakh (Old Testament) verifies that a variety of ancient scholars believed the Messiah would be born in Bethlehem.
Rabbis today still regard this Targum as authoritative, giving insight into the thoughts of the Jewish leaders at that time.  Let’s take a look at this translation attributed to the work of Jonathan (Yonatan) ben Uzziel, c. 50 BC.
The Targum Yonatan:  First Century BC
“And you, O Bethlehem Ephrathah …, from you shall come forth from Me the Messiah to exercise dominion over Israel.”
At the time of Yeshua’s birth in Bethlehem, some 50 years after the above translation was first read in the synagogues, it was still commonly understood among the religious leaders and the people of Israel that the Messiah would come from Bethlehem in Judea.
We read about this in the Gospels of Matthew and John. 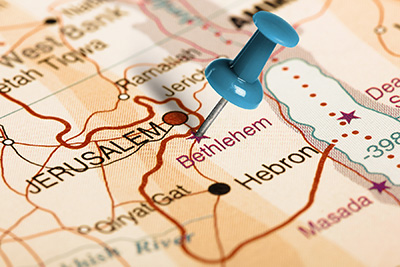 Bethlehem is six miles south of Jerusalem.
Brit Chadashah (New Testament):  First Century AD
The Gospel of Matthew, though written after the life, death, and resurrection of Yeshua, reports a conversation between King Herod and Magi from the East, who were looking for the King of the Jews:
“When King Herod heard this [birth of a King] he was disturbed, and all Jerusalem with him.  When he had called together all the people’s chief priests and teachers of the law, he asked them where the Messiah was to be born ‘In Bethlehem in Judea,’ they replied, for this is what the prophet has written:”
‘But you, Bethlehem, in the land of Judah, are by no means least among the rulers of Judah; for out of you will come a ruler who will shepherd my people Israel.’”  (Matthew 2:3–6)
Thirty years after Yeshua’s birth, common people stood in front of Him at the Temple and affirmed this understanding by saying, “Does not Scripture say that the Messiah will come from David’s descendants and from Bethlehem, the town where David lived?” (John 7:41-42)
This belief of both the scholars and the common people that the Messiah would be born in Bethlehem, stayed consistent for at least two centuries after the death of Yeshua. 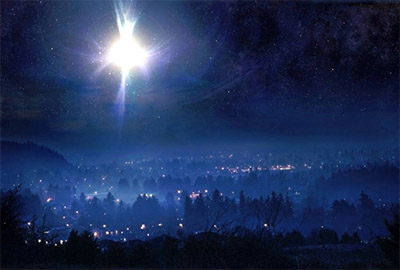 Bethlehem Star
Please sponsor Micah 5, click now
Midrash Rabbah:  First and Second Century
In typical Jewish literary style, the following story, known as a Midrash, was written to illustrate significant Jewish beliefs.
It confirms for Israel that when disaster strikes, deliverance is not far behind and that even the foreigner knew the Comforter would come from Bethlehem.
“The following story supports what R. Judan said in the name of R. Aibu:  It happened that a man was ploughing, when one of his oxen lowed. An Arab passed by and asked, ‘What are you?’
He answered, ‘I am a Jew.’
He said to him, ‘Unharness your ox and untie your plough’ [as a mark of mourning].
‘Why? ‘ he asked.
‘Because the Temple of the Jews is destroyed.’ He inquired,
‘From where do you know this?’
He answered, ‘I know it from the lowing of your ox.’
While he was conversing with him, the ox lowed again.
The Arab said to him, ‘Harness your ox and tie up your plough, because the deliverer of the Jews is born.’
‘What is his name?’ he asked;
and he answered, ‘His name is “Comforter”.’
‘What is his father’s name?’
He answered, ‘Hezekiah.’
‘Where do they live?’
He answered, ‘In Birath Arba in Bethlehem of Judah.’” (Midrash Rabbah, Lamentations 1:51)
The above Midrash is actually a portion of a much larger story.
The Rabbis whose voices are recorded in the full Midrash discuss what Messiah’s name might be. Some say his name would be Comforter, others say Shiloh, Menachem, Yanun, and David without ever coming to a consensus.
Woven into the fabric of their discussions, this portion stands out.  By referencing the Messiah’s place of birth, it demonstrates that some rabbis expected him to be born in Bethlehem.
As the story unfolds, this Jewish farmer sells what he has, starts a new business in children’s clothing, and goes town to town searching for this child, ending his journey in Bethlehem.
Over the next 800 years, the belief that Messiah would be born in Bethlehem would drastically change. 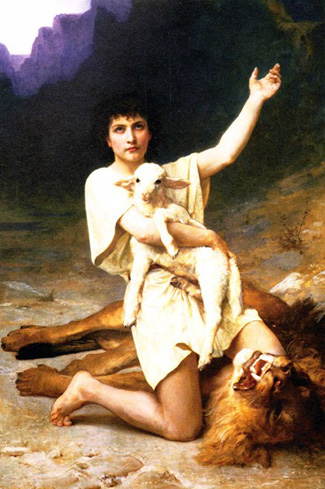 The Shepherd David, by Elizabeth Jane Gardner (1837–1922)
(Photo:
Public Domain)
Jewish Sages:  Middle Ages
The prolific Medieval author Rabbi Shlomo Itzhaki (AD 1040–1105), known by the acronym RaSHi did not believe that the Messiah would be born in Bethlehem.
Instead, he believed the Messiah would be of the line of David, who was born in Bethlehem.  In his commentary on Micah 5:2, he tied Bethlehem solely to David this way:
“And you, Bethlehem Ephrathah: whence David emanated, as it is stated (I Sam. 17:58): ‘The son of your bondsman, Jesse the Bethlehemite.’ And Bethlehem is called Ephrath, as it is said (Gen. 48:7): ‘On the road to Ephrath, that is Bethlehem.’” (Brachot 5a)
Rabbi David Kimhi (AD 1160–1235), known by the acronym RaDaK, was a medieval rabbi, biblical commentator, philosopher, and grammarian.
He also tied Bethlehem to David, believing that the Messiah would come from David’s seed, who was from Bethlehem:
“He [Micah] called it ‘Ephrathah’ to make clear which Bethlehem he was talking about, . . . ‘from you shall come forth from me a Judge to be ruler in Israel.’ And this is the King Messiah, and the interpretation is that you will be counted among the cities of the thousands of Judah.  You are young compared to them, but even so, from you will go forth for me the Messiah, for he shall be from the seed of David, who was from Beit Lehem.”  (Mekra’ot Gadolot, Radak’s commentary on Micah)
Although Radak believed that this “ruler in Israel” is the Messiah, he goes on to say that Yeshua could not be the Messiah since he never ruled Israel but was ruled by Israel—specifically, by the Sanhedrin (the Jewish ruling council).
The Sanhedrin accused Yeshua of blasphemy and declared, “He has practiced sorcery and enticed Israel to apostasy.”  The verdict: “He deserves death.”  (Sanhedrin 43a; Matthew 26:65–66) 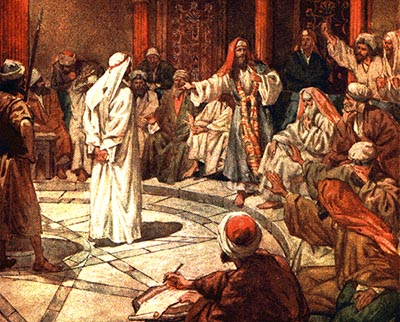 Yeshua on Trial before the Sanhedrin, by William Hole (1846–1917)
(Photo: Public Domain)
Jewish Rabbis, Scholars, Authors:  Modern-Day
Today, many Jewish thinkers forego the understanding of the early priests and common people who relied on the Targum, Brit Chadashah, and Midrash for their understanding of this verse.
Instead, they follow the views of Rashi and Radak that the Messiah would not be born in Bethlehem but that he would come from the line of David, who was from Bethlehem.
We see this now typical Jewish view in various Jewish literature, such as in the writings of the Orthodox Jewish author Gerald Sigal:
“This verse [Micah 5:2] refers to the Messiah, a descendant of David. Since David came from Bethlehem, Micah’s prophecy speaks not of Bethlehem as the Messiah’s place of origin.
“The text does not necessarily mean the Messiah will be born in that town, but that his family originates from there.  From the ancient family of the house of David will come forth the Messiah, whose eventual existence was known to God from the beginning of time.” 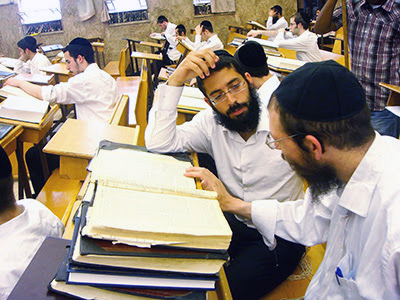 Orthodox Jewish seminary students study Rabbinic literature and Torah.
Modern Christian Belief
Most Christians have not been exposed to the ideas of Rashi, Radak, or modern rabbis regarding Micah 5:2, which explains why they still believe what the Gospel accounts, early Targum Yonatan, priests and common people believed:  Bethlehem is the place of Messiah’s birth.
Christians respond to the revised thinking over the last thousand years in several ways:
First, they agree with Jewish sages over the millennia that the Messiah is to be a descendant of King David.  This is confirmed with many Scriptures, which we will be uncovering throughout this prophecy series.
However, this fact does not mean that the Messiah could not or would not be born in Bethlehem.
Second, the Brit Chadashah (New Testament) gives insight into the thoughts of the Temple priests and the common people at the time of Yeshua:  they believed the Messiah would be born in Bethlehem (see Matthew 2:1–6; Luke 2:4-7; John 7:41–42).

Miriam (Mary) and Yeshua
Third, Radak’s idea that Yeshua can’t be the Messiah because He never ruled Israel (but was ruled) needs to be understood considering two things:
Christians, on the other hand, accept and believe that Yeshua came into the world as Isaiah describes in this Messianic prophecy:
“For unto us a child is born, unto us a son is given: and the government shall be upon His shoulder: and His name shall be called Wonderful, Counselor, mighty God, everlasting Father, Prince of Peace.  (Isaiah 9:6 / 9:5 in the Hebrew Bible).
In keeping with this and many other Messianic Scriptures, Christians believe that Yeshua is divine and that He rules over all the affairs of man, including Israel, at first spiritually and soon physically. 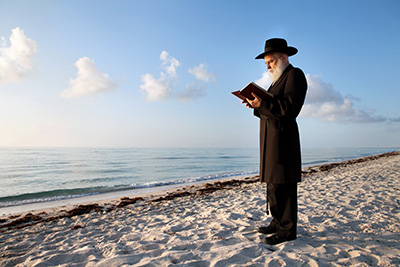 As we embark on this journey through the Messianic Prophecies, please keep our team in your prayers, so that their work can produce much fruit for the kingdom.